Brion: Right away, for someone who’s not aware of this issue, it may sound like paranoia–especially if you don’t want to think about anything related to the food supply. The example I would give to people  is how the meat industry got really upset and continues to try to push back against Meatless Mondays. Why is the meat industry so upset about something as beneficial as cutting a little bit of meat out of your diet when we have so many obese people in this country, when heart disease, cancer, and stroke are America’s top three leading killers? Well, the obvious thing is that even that little bit is affecting their bottom line. It’s the same thing with what you’re saying. It’s not like 90% of people are shopping at farmers markets. But, it’s too much, it’s cutting into the profits of the big companies out there.

Farmer Ian: Exactly. They’ve been watching this country turn to more of our food coming from small farms. That’s where the farmers markets come into play. In the last ten years, the sales at farmers markets have quadrupled [Note: more here and here]. So, that’s a pretty big step for ten years. You’ve got a quadrupling of baseline profits for farmers markets in a decade. And Big Ag, these big companies, instead of changing and becoming cleaner and safer, which would cost them money, they want to regain that lost market share by making it harder for the small farms who are doing things the right way. And they’re going about that via their lobbying pressure.

Brion: The other thing that makes all this sound really insidious and takes it out of the realm of paranoia while making it a very real and scary thing is that increasingly states are trying to, or they have succeeded in passing laws that make it illegal to conduct any kind of reporting on a factory farm, let alone even take a photograph of a factory farm from a public road [Note: See here and here].

Farmer Ian: If they weren’t doing anything wrong, then why would they be afraid to have the press come in and take pictures? I welcome anyone from the press to come to my farm and take pictures. You came out this summer and I showed you the fields, our greenhouses, and how we raise our steers. Basically, our operation in a nutshell. Did you come away thinking, oh, man, I wouldn’t eat anything from there? 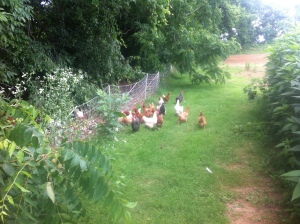 On a stroll. Green Meadow Farm. Courtesy of Ian Brendle.

Brion: There wasn’t one moment where I saw anything that I was worried about. I felt like I was visiting Middle Earth.

Farmer Ian: [Laughs] Right, and I think as a whole, all family farms operate that way. Cleanliness is at the center of this proposed legislation–that’s their claim as to why they want to do this. They want to make sure that the food supply is safe. But to me, the small farms are the ones that are being clean. The massive farms are the ones that are haphazard about the way they do things.