In a way reminiscent of how the bright orange of Josh Kim’s Spot Burgers food cart called to me in March of 2012 at 34th and Race (he now has a brick an mortar in Brewerytown), the soft-on-the-eyes cream yellow of Bright Yellow Creamery’s wheeled cart drew me in at the Saturday Rittenhouse Square farmer’s market two weeks ago.

That, and it was a bit hot.

I was immediately struck by an intensity of flavor balanced by rich creaminess. The flavors were distinct and powerful, yet they didn’t hit you over the head. The coffee ice cream—using coffee beans and espresso grounds from La Colombe—was one of the best I’ve ever had, with the espresso melodically whispering hey enough until it was a bass line you couldn’t unhear amidst the robust coffee notes permeating your being.

The cinnamon returned me to tracking down the best horchata in Philly for Philadelphia City Paper’s [solemnly pours some out of the forty] Meal Ticket Magazine. As with horchata, where the best versions utilize the rich spiciness of Mexican cinnamon, sourcing matters. While it may not particularly matter that Bright Yellow Creamery’s cinnamon is sourced from Shanghai specifically, what does matter is that is has way more character than the dude at the bar with the pleated khakis who still has his work badge on display at 9:30pm. Did you hear he went to Wharton?

It soulfulness that really impresses. And that takes honesty. For that you can’t take shortcuts.

“The process is long and extensive and a little more expensive [especially with the price of whole Madagascar vanilla pods that inform his most “basic” flavor, if there is such a thing] than using a paste or powder, but that long infusion utilizing whole ingredients yields better flavor,” says Steve Dorcelien, the brains behind the two-and-a-half month old Bright Yellow Creamery. For now, him and one of his two employees—his girlfriend Rachel Hunter–can be seen at Dickinson Square Farmers Market on Sundays, numerous festivals and events (more on that below), and occasionally at Liberty Lands farmers market on Saturdays.

Dorcelien’s a recent arrival to Philly, having followed Hunter, his girlfriend of three years, down here after she landed a new job (originally from Connecticut, he spent the last seven years in NYC). Hunter can be credited with giving Dorcelien the push he needed to start a new business—two years ago, she bought him a 1-qt Cuisinart ice cream maker (basically a freezing bowl with a mixer) as a gift.

“She knew I wanted to start a business and that I had a love and desire for ice cream. I can’t give her enough credit—I would literally not be here without her,” he says.

Back in January of this year, he enrolled in Penn State’s one week Ice Cream Short Course—one of many such courses they offer—in able to take his ice cream to the next level.

“You know, I thought it was going to be a lot easier than it actually is,” he says with a laugh when talking about diving in as a hobbyist.

“The great thing is that you make it, freeze it four to six hours, and you eat it. It’s a quick turnover. What the Penn State course taught me was the chemistry behind it.”

His learning curve, he says, was deep and extensive. Getting the right balance between butter fat and flavor didn’t come over night. Then he had to make sure he was making something that wouldn’t quickly go vampire on all the nice people stopping by the local farmers market in the middle of July. To that end, Dorcelien acquired an intimate awareness of the melting temps of various butter fats while learning how to avoid summoning the nasty lord of recrystallization that can give ice cream a grainy texture upon refreezing. “It’s all about finding that right chemistry,” he stresses, while pointing out that the Penn State course took any nebulous nuance from arcane art to studied science.

Of course, as with many a hobbyist going big-time, the pivot in scale presents a problem of its own.

“Making it at home is easy, super fun. Making it commercially for the masses is where the learning curve kicks in. You’re learning how to expand your recipes to a larger commercial machine. I operate out of a 6-qt machine instead of a small 1-qt machine. I had to learn how to blow the recipes up,” he says.

Jumping to a commercial machine, it became critical to maintain the shelf life he had reached as a hobbyist—especially since he’s not cheating like most of the big guys.

“The issue is I make a homemade product. I’m not using stabilizers or additives that will extend my shelf life artificially. You’ll find that you can leave some mass produced ice creams outside for a long period of time and they’ll still be partly frozen—that’s the stabilizers, the gums. I don’t have that, which I think produces a cleaner ice cream but that has the potential to cause trouble—so you have to get everything right. We want people to have that solid scoop while they walk around the farmers market.”

And he has gotten it right. Between my two visits, I only noticed anything—a slight pooling of cream that I happily drank after eating my two scoops—during an exceptionally hot day at the Dickinson Square farmers market. The clean, pure flavors were one of the things that hit me and will have me coming back—in the same way that the untainted German beers at Brauhaus Schmitz make for many happy returns.

All the additives and stabilizers are verboten as Dorcelien wants to push a product grounded in the best ingredients, as well as the local community.

Besides that La Colombe coffee and espresso blend, he sources dark chocolate from Nathan Miller, a Pennsylvania chocolate maker for a creamy, rich chocolate ice cream that somehow manages to come off as light. And speaking of that Shanghai cinnamon, it pleasantly surprises you as its spice sharply cuts through the fat about two-three spoonfuls in. There’s the refreshing subtlety of honey from Stormbustin’ (West Grove, PA) juxtaposed with sea salt in another flavor. His ginger and lemon grass for another flavor comes from a small farm in upstate Pennsylvania. And, like Little Babies, he sources some of the best (organic) dairy around by tapping Trickling Springs Creamery.

As for new flavors, he’s currently experimenting with fruit from a farm in Shoemaker, Pennsylvania.

After Dorcelien’s earnest spiel about sourcing, I felt better about the “all-natural” label he kept throwing around, though any concern was born more of mega corporations rendering that term to near bullshit.

And then there’s the influence of the other most important woman in Dorcelien’s life—his mother. 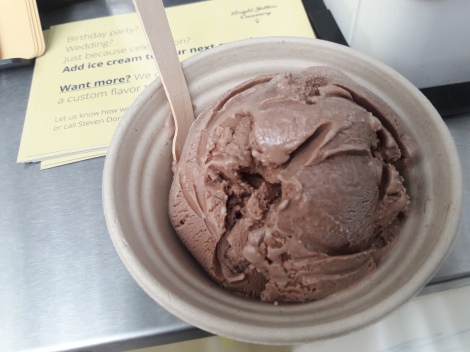 “The reason I love the organic, all natural route is because my mother emigrated here from the Caribbean [from Haiti] and her style of cooking was always super clean, super organic. If she didn’t grow it or if it wasn’t grown nearby, she wouldn’t add it to the recipe. She wouldn’t deal with anything with additives or food coloring and that’s what led me to the clean approach with ice cream,” he says.

So when he’s breaking up cinnamon sticks ahead of dropping them in milk and cream, he’s handling an indelible flavor of his youth, one used so many times, along with nutmeg and allspice, to flavor meat in a variety of dishes.

“My mom literally spends about 90% of her time at home in the garden. I was forced to help out growing. At the time, it was not so much fun, but looking back, I have really fond memories. Lots of fresh pasta with homemade tomato sauce—she makes her own pasta. I am so inspired by her made-from-scratch mentality,” he says.

While the For Haiti blend–a small example of giving back, which Dorcelien wants to do more of–from La Colombe and his mother’s cooking speaks to his heritage, he proudly attests to a global outlook inspired by his mother.

“She uses a lot of spices and ingredients and pulls influences from all over the world—her big kick right now is an Indian spice—and adds it to Caribbean cooking. She uses a lot of these heavier, bolder spices in her cooking and that’s what influences a lot of my recipes as well. We use Shanghai cinnamon because of its bolder flavors. I use a heavy fat content as a base for my ice creams, so if it’s not strong enough, the flavor could get lost. With my coffee, with my cinnamon, I try to get the strongest flavor possible,” he says.

That global approach to ingredients has been reinforced for Dorcelien through travel–he notes enjoying lemon grass and ginger across many dishes in Bali; enjoying Vietnamese cinnamon via so many uses while in China.

Besides making amazing ice cream, having a great story that speaks to his roots and life, Steve is a great guy—which really intensifies the sucker punch that comes from hearing he’s a Met’s fan (same thing with my neighbor who supports The Mets).

To deflect away from that, and the fact that he’s new to town, he’s quick to rattle off a long list of local ice cream makers he’s fond of to counterbalance the places in NYC he misses (Morgenstern’s, Ample Hill, Van Leeuwen Artisan Ice Cream, Blue Marble).

“I’m somebody who has ice cream probably every other day. I hit up Capogiro a lot. They have a walnut gelato that I freaking love. Weckerley’s ice cream sandwiches are amazing. Little Babies has these weird, exotic flavors that are super fun. Franklin Fountain is amazing,” he says, making me forget he’s a Met’s fan.

‘Cause competition is not what it’s about. In Philly, it’s all about love.

In a way reminiscent of hearing how La Colombe gave both Green Street and Reanimator advice when they were fledging coffee startups [for another Philadelphia City Paper Article—spills more from the forty], he says that Weckerly’s supplied some key insights, including which farmers markets to hit up and which neighborhoods could use an ice cream shop, along with any of his questions on commercial ice cream making.

That’s some love–just like what you’ll get from Dorcelien’s approach to ice cream.

WHERE TO FIND BRIGHT YELLOW CREAMERY