Turning frigid outside temperatures to your advantage when cooking at home.
With insights from people who know way more about cooking than I do.

On a recent night when it was  feeling like a Jake Ja-Lill-len-thal movie outside (2 DAYS FROM NOW) , cooking for hours in my warm apartment seemed the best way to pass the evening. So, I did some damage to my fridge beer supply while playing slacker security guard to my first ever pot of stock, a simmering hot tub filled with one chicken carcass, one bag each of chicken feet and chicken necks (both from Cannuli’s Quality Meats & Poultry ) and a medley of onion and carrot with leeks added per the recommendation of “Ad Hoc At Home”, a cookbook I got a few years ago for Christmas but have only recently started fully diving into. 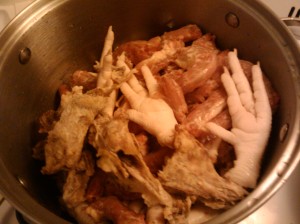 While the concept is pretty simple–make water awesome by letting chicken and aromatics perspire in it–I found myself doing what many of us do when looking at a recipe, especially one for something we haven’t tackled before: I fell into that be-ultra-careful-with-everything-I-do-mode. Though I decided to pretty much follow Thomas Keller’s lead on this go, I realized that, just as I had upped the amount of chicken for a richer stock, I could throw in whatever aromatics I wanted. A few days later, when picking up my first issue of Lucky Peach (The Cooks & Chefs Issue #2), I read an even deeper meditation on stock that related the simple clarity afforded by questioning why we do anything in the kitchen.

Which ties back to the part at the end of the stock making process that I wasn’t ready for: making an ice bath. While I would play with throwing different things into my stock next time, this is where I would have to get creative. Ice bath? You need ice for that as I was clawing through my freezer as though I’d find a compartment that opened to a particularly icy part of Narnia. 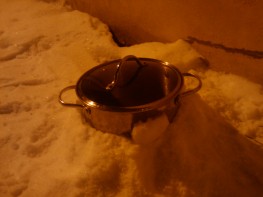 It took a moment before the thrill of freezing my ass off came back to me and I was suiting up for the cold like Kurt Russell in The Thing or that dude who makes the eyeballs in Blade Runner. And then the pot was sitting in the snow not too far from a discarded Christmas tree which dominated the stage for another bizarre, yet nonetheless tense South Philly stray cat standoff.

After swirling a few times and bringing in fresh snow, I left a snowcano behind which I hoped to see some awesome kid using as a secret bad guy lair for whatever toys kids play with while not on their I-Phones.

Speaking of smart phones, I looked up the reason for an ice bath in the first place ahead of separating the stock out into plastic containers and noting that the bottom had cooled to a flabby semisolid (thank you gelatin rich feet) after about 15 -20 minutes outside.

Seeing that it came down to something (food safety) often overlooked by home cooks such as myself, I recalled a coworker’s persistent declaration of I love the smell of e.coli in the morning during a research job at UPenn after undergrad that featured hypnotically swirling flasks left to sit at a balmy 37°C while holding poo bacteria suspended in its optimal growth medium: chicken broth.

Not that throwing something out in the snow is a bit of genius. It’s not. It definitely felt good though to use the natural elements, heretofore an inconvenience, as a shortcut in the cooking process.

“It’s just like I tell everyone in the kitchen all the time,” Billy Riddle, the sous chef at Ela, says: “be aware of your surroundings and use everything at your disposal.” He says it all comes down to common sense, that one should be like a boy scout in the kitchen, with each piece of equipment, each element at one’s disposal being applied with the same naturalistic ease of one drawing from everything around them while cooking in the woods. Every insight into why you’re doing things a certain way opens you up to more fully utilizing everything that is available to you. 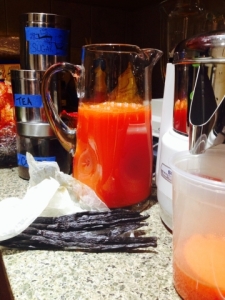 As far as his own examples utilizing the cold while cooking at home, he says he tends to keep it really simple on his days off. “Blackberry pies, sauces…I’ll just throw them on the back porch to cool them down.” That’s in addition to any 6 or 12 packs–a common response I got from most people I asked. Of course, one of those sauces, blended red pepper strained and sauteed with vanilla and sichuan peppercorn, offers a window on what one can do with simplicity. He has used it to make a red pepper sorbet: after applying xanthan gum as a thickening agent, he’ll freeze it before spinning it down in a paco jet. Or, he’ll take that chilled sauce and will mix it with some Ilegal Mezcal.

But his simple use of the elements reminded me of the first examples I thought of: my mother’s practice of putting food on the porch during the holidays when the fridge is jam-packed and the conditions are frigid outside. Those boiled sweet potatoes that will sit overnight before getting candied on Thanksgiving get the same timeout treatment as the cranberry relish, the formerly nice family cat that I sometimes think is somehow possessed by an ex-girlfriend. A broth–drawn from a slow simmer of gizzard, heart, neck, salt, pepper, onion, and parsley–that’s used to enrich the gravy, as well as the stuffing that isn’t cooked inside the turkey cavity, is also put out  into the cold.

A non-holiday example includes a chuck roast cooked in a dutch oven with a jar of pepperocini peppers and their juices. Based on a recipe by The Pioneer Woman, Mom also added 2 cups of beef stock, 1 cup water, and salt and pepper ahead of a long, slow cook. After removing the peppers, the Dutch oven was thrown out into the cold for awhile before going in the fridge overnight where the fat would set on top.

“It’s definitely a thing,” Scott Schroeder of South Philly Taproom and American Sardine Bar says of utilizing winter’s chill before telling me about a recent fluke crudo he made at home. With no room in the fridge, he put a whole fluke on a pan, covered it, and placed it atop the snow. A serving plate also sat in the snow while he prepped the rest of his dinner. Fast forward and the filets he removed were sliced into heavily chilled thin layers that were spread evenly across the chilled serving dish. To his “snow fish”, he applied a light dusting of flakey sea salt and cracked pepper ahead of adding chilled blood orange segments popping with color and flavor. Along with some juice from said oranges, fresh mint, minced red onion, and a good olive oil were added. 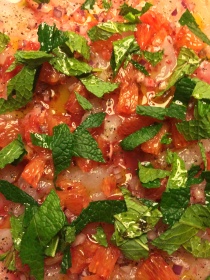 “The only trick is to serve it very cold,” he says.

When polar vortexes abound, that’s not a problem.