The idea for building a cooperative came from Will Darwall, whom Montagnaro worked with at One Shot Coffee in 2010. A consensus based model for restaurant management is something Darwall, who recently finished a stint at Elixir Coffee, has been researching for some time. “A lot of us have ideas,” Darwall says. “It’s about having people who can work for themselves. In this case though, as a collective.” Collaboration is not only encouraged, it’s vital to defining Win Win. “Our whole process is based on overlap,” says Darwall.

To wit, while he’ll oversee the coffee program and will add insights to the cocktail program, he eagerly awaits the chance to raise his game in other areas. Admitting he isn’t much of a cook, he says, “I’ve got a decent sense of taste. I want to parlay my experience with maximizing flavors in coffee to the kitchen and cocktails. Whether you’re in the kitchen, at the bar making drinks, or at the coffee bar, we’re expecting everyone to get better by gaining something from the different perspectives they’ll be exposed to.” Motagnaro, who worked at his family’s namesake pizza place in New Jersey before making pies at Vesuvio, Di Bruno Bros. and, most recently Pizza Brain, which he helped launch, will help help oversee the kitchen along with Alden Towler, Max Kochinke, and Lanie Belmont.

Montagnaro met Towler at North Star Bar two years ago, while checking out his band TygerStrype; he subsequently did a cassette release for them on Magic Death Sounds, a local Indy label he helps run. Kochinke, who went to Guilford with some of Montagnaro’s friends, has been his roommate since 2012. 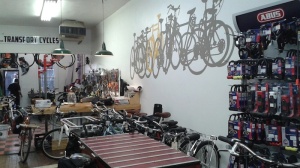 Frequenting Firth & Wilson Transport Cycles at 933 Spring Garden clued them into the spot at 931.

Towler’s background speaks to the waste not, want not ethos that informs the café’s name (WN/WN with vowels thrown in). After arriving in Philly in  2012, he worked in Camden where he taught urban farming to high school students on behalf of The Food Trust; part of that job also involved sidewalk cooking demos that stressed utilizing all your ingredients, down to leftovers. Prior to that, he worked as a farm-to-chef liaison for a food distribution company in Brooklyn. As such, he’s bringing a passion for fresh, local produce.

“The freshest food is not only going to taste the best, but it’s going to be the healthiest, and best for the environment,” Towler says. And for someone who wrote their dissertation on how industrial agriculture has damaged not only the food supply, but also rural communities across the country, he is keen to deal with as many small, community enriching local farms as possible. That thesis, he says, became incorporated into the working manifesto of The Shakedown Café, a restaurant on Pitzer College’s campus that he cofounded. While a student at Pitzer, he and another chef ran the kitchen while sourcing from local farms in Southern California. A friend from Pitzer College, Adam Forbes, who runs The Growing Home Gardens in South Philly, has helped him make inroads with the local urban farms, such as Weaver’s Way in Germantown, that he says they’ll draw upon as much as possible.