Miller evokes the book, “Culinary Art and Anthropology,” to underscore how this practice dominates life in Martinez’s hometown. While offering an examination that casts the culinary practices of another barbacoa-centric town, Milpa Alta, as artistic processes informed by the transferal of skill across generations, Joy Adapon writes:

“On Friday nights the streets of the barrio are infused with the aromas of the meat and the spices which manage to escape from the sealed pit ovens in the backyards of barbacoiero families. The smell begins to fade as the sun rises and the barbacoa is transported to markets in all reaches of Mexico City. The barrio appears almost deserted as most people are busiest during the weekend, and those who remain behind are at home preparing for the sales of the following day. Since most of the houses are surrounded by walls, it is impossible to see what is going on behind the gates, although locals know which families live in which houses and what their trades are.” 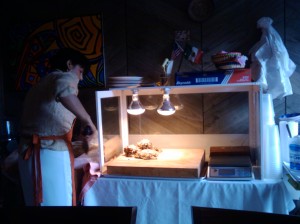 Cristina Martinez Doing What She Does Best.

As for Cristina, barbacoa was serious business from an early age. She left school in the 6th grade to help her parents run the family business, which would regularly do fiestas for 500 or more, including those for soccer players, huge factories like Coca Cola or Modelo, and feasts for dignitaries and politicians. Once, for a large department store company called Liverpool, 12,000 kilos of barbacoa was prepared (hence, besides doing half and 1 kilo portions that feed 3-5 or 5-6 people respectively for $25 or $50, they can easily feed everyone at whatever event you’re planning) . Martinez immersed herself further into the trade by starting a business with her first husband that imported and exported lambs. After overseeing the import of four trailers worth of lamb into her hometown of Capulhuac, she would cook barbacoa all day Saturday and Sunday to sell in Toluca or Mexico City.

In their dining room, I watch a video of Miller down in Mexico, heavy cleaver in hand, chopping up lamb offal for the pancita. Nearby, a family member readies a waste-high, circular fire-pit composed of redbrick. The camera pans and I see female relatives chopping onions and cilantro, while a female employee preps the tortillas.

In Capulhuac, the barbacoa does not go into the ground vis-à-vis the method employed by those in Hidalgo, the city most people think of in regard to traditional barbacoa. A higher elevation, and hence, cooler soil (Capulhuac lies some 2,000 feet higher than Hidalgo), Miller says, keeps things above ground. But, other than that, the process is pretty much the same: butchered meat placed above the coals with a tray to collect the drippings (used for consommé) is left to cook low and slow while maguey leaves seal the top and sides before the hole is plugged with a combination of materials that can include sod, sheet wood, and blankets.

Miller and Martinez, as with an array of Philly chefs from Mexico, replicate the process on stovetops in giant pots fitted with steam racks. The maguey leaves seal in the meat along the top of the pot, imparting some flavor as they’re tucked down along the sides of the pot like blankets. The stuffed fresh lamb stomach that is the pancita, is wrapped in plastic and cooked along with the barbacoa in the same pot. The minimal amount of juices that escape helps add even more flavor to the resulting consommé.