I’m left alone with these vivid details dancing in my head to comingle with the Mexico travel photos Miller and Martinez have pinned to their dining room bulletin board. A photo taken from their kitchen, wherein Miller holds a leg of lamb, flitters before my mind as I eye ramekins on the table before me holding nopales (lightly sautéed peas, carrots, onions, and cactus), salsa roja, onions, and cilantro, as the distinct smells of lamb and the more piquant aroma of the pancita reaches me.

Martinez reaches into a bin with a butcher’s knife to extract sizeable chunks of lamb that she places on a butcher’s block surrounded by a three-panel glass screen that suspends heat lamps over a growing pile of lamb and the plastic-wrapped heap of pancita.

“The plastic keeps it [the stomach lining] from browning,” Martinez says as she readies me a lamb barbacoa taco comprised of cuts from the rib (costilla). The flavor is warming and as redolent of lamb as you can get, with each insanely juicy piece—they cook the lamb for 10 hours—falling off the small, thins bones. Hence, I readily believe Miller when he talks up the importance of using fresh-killed 4 month-old lambs from local farmers (he wasn’t inclined to say which ones).

As with some of the best tacos, I’m indifferent to any toppings beyond the cilantro and onions. This is real cooking, where you don’t need to cover up any lapses in product or process with a heavy shellacking of ketchup, A-1, or whatever cloying sauce some kitchens keep warm in a steam tray.

As for the pancita, the fattiness of the pork adds immense flavor that enjambs with a mild spiciness backed by the slightest hint of offal. As good as it is—a near hypnotic stream of juice runs from the massive mound of pancita throughout the meal to collect in a metal tray holding the cutting board—I’m irrevocably drawn to more cuts of lamb.

“What do you want to try next,” Martinez asks, eager to show off the beauty that lies in distinct flavors drawn from different, lamb-spanning cuts—something they tell me some barbacoa aficionado’s adhere to with the loyalty of a VFW stalwart for a given beer.

My ears perk up when I hear Miller say, in an exchange with Martinez, the word cabeza.

The unctuous, fatty flavor of an eye plays upon the lush flavor from meat pulled from the back of the head. From the knuckles of vertebral bone lining the taco, I pull even juicier, more flavorful meat, with the gelatinous strips pulled from the bones’ circular, interior chamber serving as icing on the cake.

And then I’m offered tender, juicy strips of lengua as sublime as any roast I’ve ever had.  Between all these tacos, three glasses of a homemade, pulp laden tamarindo—they also had a homemade hibiscus on hand—and a bowl of consommé, I’m somehow able to down a wedge of Martinez’s homemade flan that’s intriguing while being denser and creamier than the usual take on the dessert (she contends it wasn’t perfect, but I wasn’t complaining). 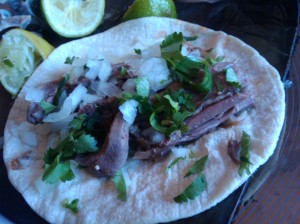 As three friends, one wearing a cowboy hat, who arrived as I finished, alternate between solemn silence and excited Spanish, I talk to Miller in the kitchen. I drink an insanely delicious coffee ladled from a giant ceramic vessel seated upon the stovetop. “Canella, piloncillo [sugar cane], y naranja,” Martinez says when Miller inquires about the flavor enhancements for me in Spanish. The scored orange delivers a flavor reminiscent of the warm, Christmas-y ponche they previously had on hand.

While they won’t do drinks for their upcoming food cart, a similar sense of variation, albeit subdued, will be seen in other areas. Their nopales will change with the seasons, and Miller says they’re not interested in doing their salsa verde and salsa roja in exactly the same way every time. “We’re chefs, not robots, so yea, they’ll be little tweaks from time to time,” he says, pointing out how Martinez has varied the interplay of peppers for her roja. Besides adjusting the ratio between the usual suspects, surprises, such as a recent bundle of insanely spicy fatalii peppers (~250,000 Scoville units) from farmer Tom Culton, offer opportunities for them to get creative.

Their agua frescas and assorted warm drinks will be on hand once they realize the dream of opening a barbacoa restaurant. They’re currently in talks to occupy a portion of a warehouse decorated inside and out by artist Isaiah Zagar. Their first hurdle is getting community approval at a meeting arranged by The Easy Passyunk Crossing Civic Association. A meeting originally reported by The Passyunk Post has been rescheduled due to snowfall to 7:30pm Monday, January 28th at the library at Neumann Goretti High School (entrance is at 11th and Moore).

After meeting with people from the community, they’ll meet with the civic association, with the zoning board looming as another hurdle.

“So many things can kill this project,” an undaunted Miller says while conveying that things are far from being finalized. He ticks off the absence of available parking (other than a neighboring high school lot he hopes he isn’t being wistful in thinking he could request for use), as well as meeting with architects and various contractors, let alone investors.

But, first there’s seeing how welcoming their neighbors would be to the idea of their proposed restaurant.

As someone familiar with their take on barbacoa—it stands above any I’ve had in my survey of Philly barbacoa—I’ll be there Monday to lend my support and I hope people reading this will come out to do the same, as Miller and Martinez will be adding much more than just the first truly pit-roasted barbacoa to South Philly* if their restaurant plan becomes reality.

*While their business has been labeled as South Philly Barbacoa in the media, Miller says they’ve yet to come up with the name they will use.