I talked with Jennifer Choplin about her background in pizza and the Philly food scene, and her move to the soon-to-open South Bowl Philly. Minus a one year stint in Atlanta, she’s been working in Philly kitchens since 2000, with stints at White Dog Cafe, Bistrot La Minette, Resurrection Ale House, Taproom On 19th, and Dock Street Brewing Co. (which she’s soon leaving), among others. She’ll be the pizzaiola and co-sous chef along with Mark McQuown, formerly of Bibou, Sidecar, and Kraftwork. Chef Todd Goldman will oversee both North Bowl and South Bowl, with the majority of his time spent at South Bowl in the  first 1-3 months, he says. 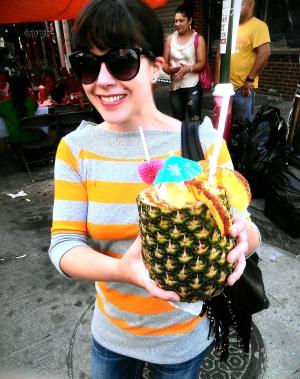 You two are going to be running the kitchen together, with Todd Goldman overseeing things?

How did your background, particularly your time at Dock Street, help you?

After Taproom, I needed a job. Collin Keefe, who’s friends with Rosemarie [Certo] and Marilyn [Candeloro], left me a message on Facebook saying they needed somebody. It turned out, it was like pizza school pretty much. I loved working there but I knew it wasn’t where I wanted to end up. Everybody I met there is so great. I focused and paid attention so much on doing the pizza. From making the dough, to stretching it out, to working the ovens. How to put toppings on the right way and how to cook it the right way. Every aspect. I knew that knowledge would be able to help me wherever the next step would be. Rosemarie’s family comes from Sicily. They come from a wealth of old world pizza experience and they brought that to Philly to their Center City location and then to West Philly. Sasha [Certo-Ware] taught me so much on how to make pizza. They do it so much in a philosophical sense–it isn’t just technical knowledge. It’s the philosophy of making pizza pretty much. One thing I want to do at South Bowl is a pizza school. This is just something I thought about the other day. I said to the manager, it’d be cool to have people like Joe Cicala come in and give the same pizza tutorials that I had at Dock Street.

Your burgers were awesome at Taproom. Any ideas on burgers at the new place?

I know people love pork roll and fried egg on burgers so the first idea I have is for a pork roll, egg, and cheese burger. I know somebody like [twitter food fanatic] John Cohl would lose his mind.

Do you plan on bringing back any favorites you’ve done?

I don’t plan on reinventing any old dishes or anything but I’m still gonna make sure that vegans are taken care of, families are taken care of, that there are things for little kids to eat that they’ll like. That was one of my big things even at Watkins [Drinkery]–that people could bring their families in. Sowe. Taproom on 19th. I made sure the food was really family friendly.

Can you give a couple examples?

The macaroni and cheese that we were doing at Taproom [On 19th]. A nice simple cheddar mornay sauce with gemelli that I learned how to cook properly at Bistro La Minette. French people like pasta, as they do their vegetables, cooked a little softer–so it’s just past al dente. It makes for a creamier, softer bite for mac and cheese. It could get a fried egg on it, bacon, pork roll. A little kid could get nothing on it. Little kids used to go nuts over that. The lamb burger at Taproom On 19th–people really loved that too. People in that neighborhood were iffy about lamb and weird meats. They went crazy for the lamb burger. They’d say geez, we didn’t know we’d like lamb. Ron Templeman [of Pigheaded BBQ] said that was one of the best burgers of the year.
CONTINUE READING >

One response to “Interview: Jennifer Choplin Talks About Her Move To South Bowl Philly, Her Pizza Education”