Cooking is as much intuitive as any other creative endeavor. But first you have to pick up some decent techniques before making the art, whichever facet you choose, your own in the manner of studying a martial art. In the meantime, you’ve got one perpetual homework assignment that isn’t all that bad: you have to keep learning from people who are way better at it then you. In Philly, that means acquiring flavors and tastes anywhere from Los Taquitos de Puebla on South Ninth St., the polished environs of Vernick,the warming atmosphere of Standard Tap, to the artisanal showcase that is Le Virtù on East Passyunk.

While you may never master Pei Mei’s five-point palm exploding heart technique–or whatever its equivalent is in making soufflés or macaroons–committing yourself to trying new things as well as trial and error at home, can bring you much closer to glimpses of genius that can do something something something for your your life (I’m not here to tell you to care). 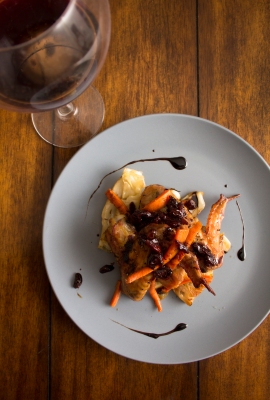 Speaking of genius, a wise man of much skill–one Ben Puchowitz when I first met him to discuss a City Paper article from 2011–once broke cooking down for me in a way that was near earth shattering. That is, Puchowitz, a guy so completely free of ego that he seems embarrassed when you compliment his food at Cheu Noodle Bar, negated a great deal of the distance I had placed between myself and great food by saying it really wasn’t that complicated, that it’s all a matter of a few elements such as fat, salt, sweet, bitter, acid, herbal brightness etc., complimenting and contrasting each other, and that he usually employed only three such elements for most of his of dishes.

While he said that when he was at Matyson, I’ve seen that elegance through simplicity on display at Cheu with dishes such as his hand torn noodles that’s a perfect collusion of fatty/sweet (juicy, sauce drenched lamb) and sweet (dates) juxtaposed with a briny spotlight (pickled mustards greens).

Since then, I’ve been trying to apply the deceptively simple approach of utilizing elemental components to my cooking as much as I can. And, I’ve tried to pay attention and to spot these things when someone else was cooking.

But, as with writing, start with what you know.

Me, I enjoy putting wings in my face. And, with The Super Bowl fast upon us, it’s that time of year–just like St. Paddy’s Day is the time to remember you like drinking.
CONTINUE READING >

One response to “Winter Wings”