Brion: There’s some goat cheese in there?
Dan: Some goat cheese, some sweet, little roasted carrots. Balsamic. If we have some leftover pumpkin, we’ll throw it in there.
Brion: Dan, so you’ve been with Nomad for awhile?

Dan: Yeah. I started working with them on their truck in preparation of this spot and have been with them since, minus a 6-month leave of absence. So about 4 years total.
Brion: Why deal with a small farm like Z Food?
Dan: It’s like anything else—less hands. If we can just deal with the person who is communicating with their own plants, then that’s what we’re going to do. We also use Zone 7 which goes to a bunch of different farms to sell their stuff and that’s awesome too but I would just prefer to deal with a farmer. More of a direct relationship that’s legitimately farm to table. We do Neopolitan pizza so it’s all about high quality ingredients done simply. We’re fortunate enough to have access to farmers like Z Food. It just goes well with Teddy and Stalin’s concept, which is Americanized Neopolitan pizza. Even something like basil. Unfortunately, we’re not getting nice basil right now. The basil we were getting from Z earlier in the year was so nice. It tasted great.

Alan: Damn that basil downy mildew.
Dan: Is that what happened?
Alan: It’s a disease that came into Florida around 2005 from Europe where they had it for awhile. It’s an airborne spore and it wipes out all the basil. It moves up the eastern seaboard and it’s been getting here earlier and earlier each year. This year, we were done with basil by mid-July.
Dan: David’s basil totally elevates something like the margharita. Way better than anything else.

Excerpts from my phone conversation with Z Food Farm’s founder & farmer, Dave Zaback.
Dave Zaback: I’ve known Stalin & Teddy since I was an intern at Cherry Grove Organic Farm back in 2004. Teddy, who you know as Tom, he was the co-owner of Thomas Sweet, which is an ice-cream shop back in Princeton. He was getting out of that business and then he was super interested in pizza and he had a wood-burning oven installed in his house before Nomad existed. He would host pizza parties at his place and all the farmer folk and other local people in the biz—but mostly farmers—would come over. It turns out, that was all part of the process of refining their business, which I don’t even think they knew that when they started it. It was everyone eating pizza just for fun. And they were like, hey, we should start a restaurant. They started with a pizza truck. Hence, Nomad, because they were moving around. And they finally got a place in Hopewell, NJ. And it was wildly successful because it was insanely delicious. They ended up expanding into Philly. Maybe occasionally, I would sell them basil from the farm I managed previous to Z Food Farm, and it just grew from there.
Brion:Which farm was that?

Dave: Gravity Hill Farm. I was their inaugural farm manager. It was post-internship. I was an intern from 2004 till 2006. And then managed Gravity hill from 2007 till 2009. From there, I started Z Food Farm. We started leasing the land in 2010. Unbelievably, this is the end of the 6th season of Z Food Farm’s existence. It’s wild to think about it.
Brion: When you started that internship, were you coming out of college?
Dave: Bingo. My degree was in cultural anthropology—cultures, society, and people. I got interested in food while I was in college and through my anthropology degree, I was interested in, broadly speaking, how people exist in society. The most unifying theme I saw was that everybody has food traditions. I was learning more and more about agriculture, especially sustainable agriculture and where food comes from, and that where food comes from in modern society is pretty shitty. So, yeah, you put those too things together….I didn’t set out to be a farmer. I had no background in agriculture. I was doing all this theoretical shit and thought, hey, I could actually volunteer on a farm. And then the rest is history.
Brion: So, right after graduating, you jumped into the internship?
Dave: It’s a long story. I actually didn’t graduate until 2010—remotely from New Jersey, from Iowa. I left college. I had literally two classes left with Iowa State Univeristy. What happened was, I wasn’t intending to leave college. I volunteered at a farm briefly and when I did the internship at Cherry Grove Organic Farm, I was still a college student. Basically, I got sucked in and then I was just like I’m not going to finish college right now. I was like, no way in hell. This is awesome. I have to finish the season. That was 2004. I stay at the farm. Finish the internship, which meant staying there for three years. From that point, I just end up going down the path of being a farmer, which has been totally awesome. That being said, my parents were initially skeptical because they wanted their child to graduate from college. They were super onboard once they realized how passionate and into it I was.
Brion: How important is it then to have the market but then to also have these connections with local restaurants?
Dave: What’s cool about the whole scene is that it’s relationships. I’ve known Teddy and Stalin for a decade. When I was a young intern kid, that’s when I met them. And that’s why we work together now. Even when it comes to Sbraga, which is the other main restaurant in Philly—and with this being a Philly centric story, I’m going to give you a detour with Elements. It’s the same story both ways. I met Scott [Anderson] who’s the chef/owner of Elements in Princeton during my first year at my internship. He would come twice a week to come and pick up from Matt Conver—basically my best friend/mentor—because he cared so much about getting the most fresh local produce.

Dave:Scott would come every week during my first winter in New Jerysey, 2004. I needed a job to make money. I asked if I could wash dishes. They told me that I could wait tables. So basically what happened, they’re doing new American cuisine. It was more than waiting tables. It was getting immersed in an entirely new world. Which is to say, as much as I was interested in food previously, as much as I learned working for Matt, I was thrust into this world of new American cuisine and hospitality. Taking care of people. Treating people right, presenting this amazing food, and on the menu was food that I was semi-responsible for as an intern at that time.

They are the first restaurant that I came to know and still work with. At the time, it was the Lawrenceville Inn, which no longer exists, but that’s how I met Scott. Elements opened in 2008 or ’09 or something like that. I was a waiter there just that one winter. That winter working with them set me on the course that I’m on now. They’re always interested in new vegetables, interesting vegetables, but not even [just] that, more importantly, they’re interested in the highest quality. So, every single farm grows rainbow Swiss chard, right? But they want the best rainbow Swiss chard. On one hand, I work super close with Elements and I’ll totally get back to Nomad, but Elements—Scott and his cdc Mike Ryan —they push me in a good way to do the best I possibly can. They keep me on my toes, which is great.

Brion:What do you mean by that?
Dave:What I mean by that is two-fold: 1, having the highest quality product—they are always coming out to the farm and I welcome them out to the farm because they should come. Every single chef I sell to should come out to the farm and check things out. Having a sense of exactly what they want. And they come out during the entire stages of the plant. They’re checking things out as they grow so they know how things grow. They know when they’re gonna be ready. Two weeks out, they can make a plan. We’ve been here, we’ve talked to you. That’s the information part.

Getting back to Nomad, it’s an extension of the friendship because I care about food, they care about food. They’ve been caring about food longer than me. They respect what I’m doing in my own little world with farming. It’s really pretty cool. I’ve looked up to them.
Brion:So how did you link up with Kevin Sbraga and his restaurants? 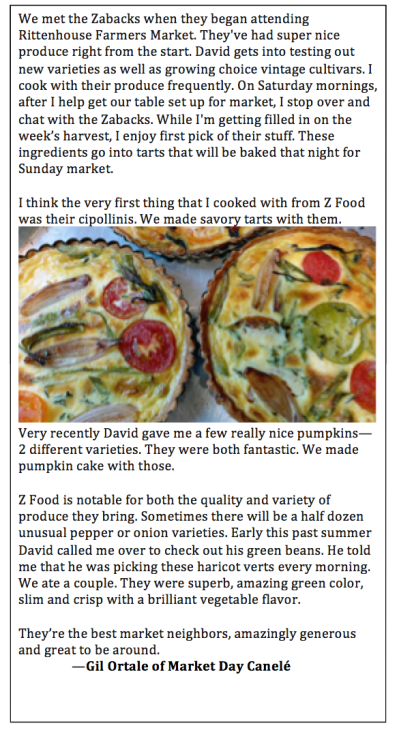 Dave:There was a market last year during the peak of tomato season—probably August or early September. They were calling for rain. So, I contacted Scott and was like, hey, we’re going to market, we have a ton of stuff. Do you know any chef in Philadelphia who might be interested in product because it’s going to be a shitty market. Scott posts on Twitter, hey anybody from Philadelphia want produce from Z Food Farm and Kevin Sbraga tweets at him right away. I don’t even know this is happening. Then I get a call from Scott giving me his phone number. I call him right away. We set it up that I would go by the back of the restaurant with our truck after the market. What ends up happening is that the rain never came and it ended up being a good market, so we didn’t have a ton of stuff, but they bought right out of the back of the truck for the restaurant. And that’s how that relationship started. Now, they buy every single week. They get a list. Nomad I would say buys more quantity of things. Sbraga buys more of a diversity of things.
CONTINUE READING >