I recently spoke with Travis Messman and Chivonn Anderson over drinks at Fountain Porter in South Philly. We talked about how they came to start their new business, Viva Empanada, and how their background in the restaurant industry informs what they’re doing. Selling wholesome empanadas that are fried, composed and complemented with dipping sauce, they’ve been popping up at local farmers’ markets, including Rittenhouse square where I’ve run into them twice while shopping at the farmers’ market (also see here). They’ll be at Rittenhouse Farmers’ Market for the next couple of Saturdays, 10am-3pm.

Brion: You’ve been at Rittenhouse last week and two weeks before?
Chivonn: We were there the weekend after Thanksgiving and the one before that.

Chivonn: Travis and I met working at the pop-up beer garden at 9th and Wharton this summer. We were placed together through a mutual acquaintance: Susanna Ryan. She knew that we would mesh well together. In such a stressful situation it was pretty amazing how within sitting down and talking for about two hours we realized we had a lot in common and we knew that taking on something on this ridiculous level was going to be something that we could handle and it was. From that, we were able to break out on our own and start working for ourselves. 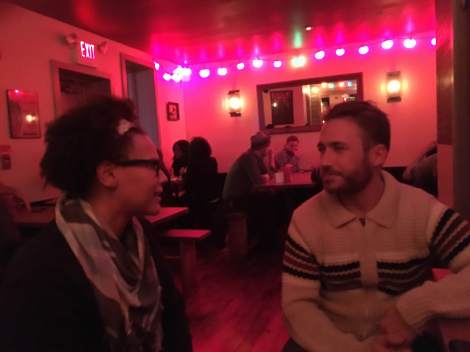 Brion: What is it about your personalities?
Chivonn: Well, we both have a history in the restaurant industry. He’s a trained chef who’s been cooking for 15 years and I’ve worked in the front of the house for 15 years. So we have that balance of respect for each other, knowing what it takes to produce the food and what it’s like to deal with the customers. You have to have a balance and respect for each other’s position. Now, we’re kind of flip-flopping. I’m getting an education from him that people pay thousands of dollars for and he’s transitioning into the front of the house and seeing what it’s like to deal with really lovely customers and really unruly customers and how you end up dealing with them and sometimes saying whatever you want and having them walk away from you.

Brion: Tell me more about your background.
Chivonn: I started working in restaurants when I was 16—as a hostess. Made my way, started serving. Joined the military for four years. Ended up in Florida and Texas. Spent 8 years in Austin. Worked for a company called The Alamo Drafthouse and made my way through the ranks from a food runner to upper management doing large events, but just always in love with food and the joy it gives to people. I love having people in a food coma or giving them a food high because nothing comes close to that feeling you get when you have really really good food. Maybe sex. Having that respect and being in the service industry and knowing what it’s like to give people what they need and sometimes what they don’t know they need.

Brion: What’s your background in the Philly restaurant industry?
Chivonn: When I was 18, I worked at Sassafras. That was a really awesome experience. They had really good food—this was back in ’99. I learned what it was like to be in a high demand restaurant where there’s only three people that are working there and what it takes to have good service. If it’s good food that I can sell, I’m going to sell the hell out of it. And I’m not going to sell people something that I don’t stand behind just because somebody tells me to.

I was gone for 15 years. I came back in 2013 and in 2014 started working for the restaurant group behind Cantina Los Caballitos, Royal Tavern, Triangle Tavern. Did that for about a year and half. I started working at Cantina as a bartender/manager and was approached to help them open this pop-up beer garden in the summer of 2015. I met Travis and we developed our wonderful relationship.

Brion: [To Travis] Why did the two of you hit it off?
Travis: She came up to me and she’s like, if you had a hundred thousand dollars what would you do with it? I think I—
Chivonn: You were like, NOT FOOD! [laughing]
Travis: [Laughing] Yeah, anything but food. And a couple days later we came to our senses and we were like, food is actually what we know. She tried the military, that didn’t work out. I tried to be a real estate agent for a second. That was fucking stupid.
Chivonn: It’s really funny though, we both had a real estate license. I had mine in Austin, he had his here and we both realized it takes way too much money to do that.

Travis: We have other shit—we’re both crazy. Did you make it to the beer garden at 9th & Wharton?
Brion: No. That was the one that pissed a few people off, right?
Travis: Pissed a lot of people off. Something about parking or whatever.
Chivonn: The neighborhood association wasn’t happy for awhile but that was more a concern with the condos that were going to be coming in. Everybody in the neighborhood loved it, especially people with kids because they could let them come in and run around like idiots.
Travis: It was a daycare.
Chivonn: Basically. [laughing]
Travis: [More serious] It was good for the neighborhood. It was really good.
CONTINUE READING >