Returning The Support Dinners Start This Tuesday, February 28th at 7:30pm at American Sardine Bar. [UPDATE: Dates & locations for upcoming dinners will be posted at the end of this article]

Living in South Philly, I’m surrounded by people reaching for the American dream in the same way anyone’s ancestors have. The first thing I tell people about why I love living here is that walking in either direction brings Vietnamese, Italian, Mexican, or Cambodian food. If I lived in one of the many soulless condos-up-top, shopping-on-the- bottom buildings popping up all over Center City, perhaps Taco Bell and Subway would be my go-to source for quick, affordable takeout food as opposed to Taqueria Prima La Fonda or any of the numerous places selling banh mi’s along Washington Ave.

But then again, I’d have to be a different person in terms of how I appreciate food (seriously, how does the Subway at 11th & South exist when it’s a 5-minute walk away from Sarcone’s). 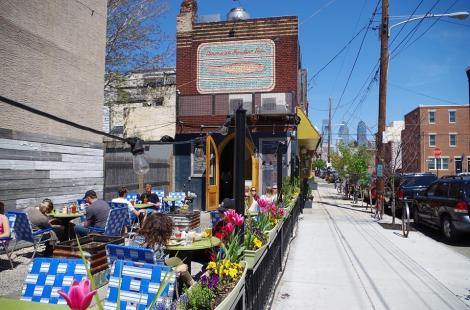 American Sardine Bar is the site for the first Return The Support Dinner. –ASB.

And, I wouldn’t have the eye-opening perspective of being able, sometimes in the slightest of ways, to interact with so many disparate cultures—as opposed to the sea of uniformity of where I grew up in Northeast Philadelphia.

So it’s always unsettling for me when, in-person or online, I encounter sentiment that runs afoul of reality, let alone human decency, when it comes to immigration.

That’s because many of my neighbors, just like some friends of mine, are undocumented immigrants.  When seeing the vitriol coming from people overwhelmed with a cocktail of hate and misinformation, it’s—I hope—not too much to think that many people could benefit from being in close proximity to the people they’ve chosen to vilify [Pew Study]. Remember the turning point in American History X where Edward Norton’s incarcerated neo-Nazi finally recognizes the humanity of a black person through a prison work assignment? With that in mind along with some faith in humanity, we should direct those who hate undocumented immigrants to look no further than the scores of restaurants that employ them.

While it would be nice for some of these people to get a stage and have an American History X like epiphany while building kitchen skills, we know that isn’t going to happen. Besides the fact that undocumented immigrants fill jobs that others don’t want, much has been said about the democratic nature of the kitchen where unnecessary bullshit such as empty-headed xenophobia and hate just wouldn’t fly—especially when you’re fucking with someone who out-cooks or out-preps you.

With that said, rather than responding with reflexive annoyance to the people who live and work next to undocumented immigrants, hopefully more people can appreciate or at least consider what informs the stance that several chefs and restaurateurs have taken.

And until we’re all on board seeking a rational, human solution for immigration, those who have empathy should try to do whatever they can.

Wanting to find some way to make a positive impact, I proposed the following idea at a recent town hall meeting at South Philly Barbacoa. Owners Cristina Martinez and Ben Miller have been leading the conversation in Philly about immigration reform, particularly through their Right2Work Dinners which call for recognizing the reality of so many employed and undocumented workers. Also in attendance at the meeting were Cathy Lee and Francis Cretil, the owners of Le Virtù who recently started speaking out in support of immigrants—including members of their staff. Chef Joe Cicala ran the kitchen solo on the February 16th A Day Without An Immigrant protest as immigrant staff were given the day off. On March 15th, they’re hosting a Sanctuary Supper and will shut down on May 1st, in honor of the next A Day Without An Immigrant protest.

My idea is simple: in order to get more restaurants to feel comfortable taking a stand on immigration, I’m launching a casual dinner series that will visit restaurants that shut down on the February 16th A Day Without An Immigrant protest or have committed to shutting down on May 1st. For now, Returning The Support Dinners will be à la carte—order what you want or just have some drinks.

First up is American Sardine Bar, which shut down for dinner service on February 16th. I did an interview with Doreen DeMarco, their highly talented chef, back when she first came on as a sous (she’s also overseeing the limited menu at Second District Brewing).

Besides supporting those who are sticking their necks out for people being maligned and attacked by a certain orange coward, these events can serve as networking and activist brainstorming sessions—or we can just get drunk and eat great food.

Hopefully we’ll encourage more restaurants to stand in solidarity with undocumented immigrants by closing down on the next A Day Without An Immigrant protest on Monday, May 1st. More casual dinners to follow every week.