About a year ago, I wrote about how Justino Jimenez preps for his al pastor tacos ahead of his first spot in the food cart at The Garage. At the time, he was finishing out his final days at Ristorante Vetri, where he had worked for 13 years. Close to two months later in April of 2015, he opened his first restaurant down on 6th & Oregon. In the fall he opened a second location in Logan Square ahead of quickly closing the South Philly location [he tells me he originally intended to run both, but staffing presented just one issue].

I spoke with Jimenez ahead of his return to the food cart at Garage Philly, where he’ll be doing his tacos al pastor, along with two other offerings on February 9th and 16th.

Brion Shreffler: The first time you were going to Garage, you were still working at Vetri. What are your general feelings going in there now, after working on your own for close to a year?
Justino Jimenez: It’s a lot of pressure now, I’m gonna say [laughs]. A lot of pressure on me. I’m happy with that though.

Brion: Talk about the difference between being in a good place at a successful restaurant and being happy running your own place.
Justino: It’s more pressure and there’s much more to think about. Right now, my situation is, we slowed down here [with the winter]. So much pressure because you have to worry about rent, you have to worry about insurance payments—all that kind of stuff. Paying salaries. When you work on the line, you worry about doing your job and you go home. The next day you come back and work. Now, it’s a little different. It’s another stage. 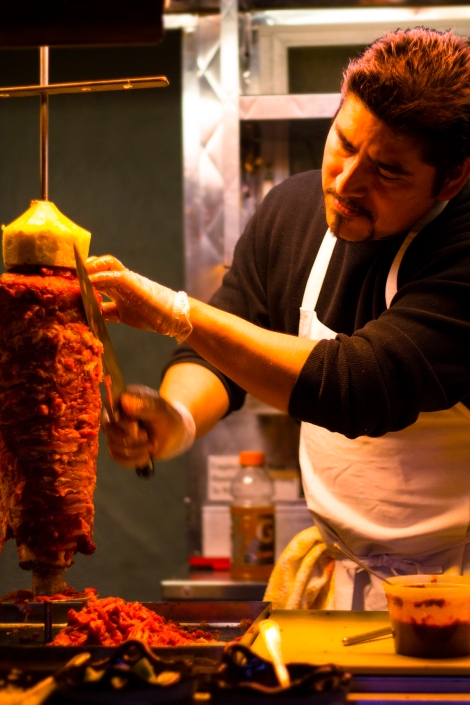 Justino Jimenez in the food cart at The Garage. He’ll be there February 9th & 16th. by Jacki Philleo.

Brion: Talk about the happiness side of it.
Justino: You meet new people when you have the opportunity to talk to the customers. And you enjoy what you’re doing—that’s the happiness part of it, I have to say. Plus, I am my own boss.

Brion: Why did you close your first location [in South Philly]?
Justino: I opened this [Logan Square Pizza & Cocina] so quick so I couldn’t find the right the person to take care of my first one. And then I didn’t have a choice to stay down there. I tried for a month [to operate both businesses] and then I chose to sell the other one.

Brion: What’s appealing about your current location?
Justino: We’re in Center City and the place is bigger. It’s cleaner than at 6th and Oregon. The customers are way different. It gets much more crowded than down there.