And with B Street, he’s applying something we normally don’t associate with bagels: seasonality [other than that obligatory pumpkin bagel every fall].

While interviewing Gallagher in his home, I was fortunate enough to sample a new item in the B Street line up, called Red Pepper Red Pepper. Delicious, it’s packed with flavor from pureed fresh red pepper and red pepper flakes in the dough. It’s the new seasonal replacement for the cucumber dill bagels. He toasted one up and I enjoyed it with his truffle mushroom cream cheese and sliced tomatoes.

The pairings are to be noted. The B Street website offers a whole page of recommended bagel-and-topping combinations. I am presuming some part of this came from constantly being asked about food and beverage pairings by guests in a wine-heavy workplace at Tria Cafe and Tria Taproom [full disclosure: I work at Tria, myself]. But I suppose anyone who loves food will be considering these factors, as Gallagher does. Just like the creative bagel flavors, the recommended pairings are also on the inventive side. You can spread decadent foie gras cream cheese on a sour cherry cocoa bagel. Or top a sushi bagel (made with rice flour, wasabi, nori, and sesame) with cream cheese, lox, cucumber and red onion to mimic an actual Philadelphia sushi roll. There’s also the opportunity to approximate a Reuben with a middle-eastern spiced za’atar bagel. 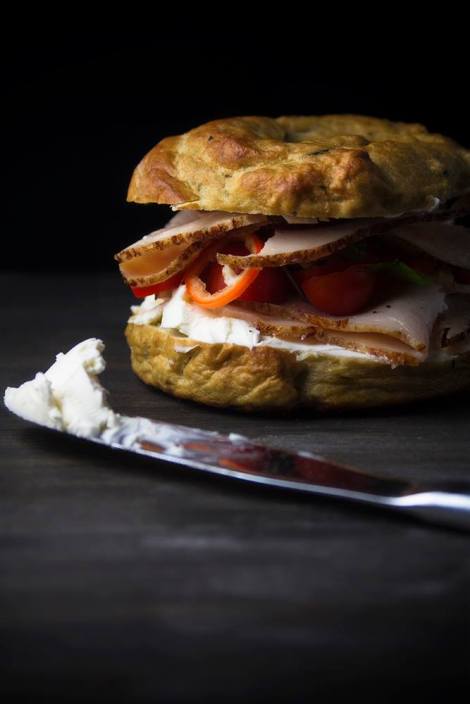 “I started just making more and more bagels and a couple friends were like can we get these like all the time? I think it was four buddies who all live around here [in South Philly]. I was like all right, I’ll make you guys bagels – but you’re paying for them,” Gallagher says.

“A few other people heard about it, one being my one buddy’s mom: I want the bagels too. I thought I would be making four batches of bagels and instead I was making eight batches. Back then it used to take me a long time,” he says.

Demand increased and Gallagher came up with a subscription program, where subscribers would receive a half-dozen bagels, freshly baked, delivered to their front door on Sunday morning, twice monthly for a  reasonable fee.

“That first month we did seven subscriptions, then the next month fifteen. ‘Cause once someone heard about it, it was like, you gave TJ bagels. No, TJ bought bagels. It’s like a bagel share. If TJ’s getting bagels I want bagels.”

“[The bagels] started turning out decent. Better than what was available. Now there are a couple bagel shops in the city that are much better [than what was previously available]. Knead I think just opened right around that time, maybe a couple months after that. And Philly Style Bagels…it’s two guys. They work out of Pizzaria Beddia doing like a similar-esque thing to what I was doing – like Sunday morning pickups or selling out of that shop,” Gallagher says.

“From there it went from fifteen to like thirty something [batches], just like that. It was kind of like oh shit. That’s when we started using the D’Angelo’s kitchen. They’re a fully functioning Italian restaurant with a gorgeous kitchen. Very rustic. Everything is very old-world nice. They have butcher blocks for miles that are probably 150 years old. They’re gorgeous.”
CONTINUE READING >