Gallagher is friends with chef Tony D’Angelo’s son, Giuseppe. He plays bocce with Giuseppe’s uncle, Sal D’Angelo, who co-owns the restaurant with his brother, Tony. An arrangement was made that Gallagher could use the kitchen on Sunday mornings as long as Giuseppe was present.

“So, Giuseppe kindly agreed to get up at five in the morning on Sundays and come make bagels with me…without that it would have never really taken off.”

Laura, Gallagher’s fiancé, is there the whole time, as well. She not only helps with the bagels, but is also doing a lot of word of mouth promoting.

She works in an office downtown and would frequently bring in bagels for coworkers. Other people in the shared work-space got interested and eventually Gallagher got involved with Food.ee, a Canadian office catering company that recently started operating in Philly.

Food.ee is promoting his endeavor while providing a consistent clientele of weekday 9-5ers. When I talked to him [in early December], he had made bagels Tuesday through Friday the previous week, all while working full-time at Tria Taproom.

“I never went to sleep, I just started making bagels for 6am pickups…The hardest part is trying to figure out the balance between two jobs that have really shitty schedules at opposite ends of the spectrum.”

In addition to filling office catering orders, Gallagher was still trying to do Sunday deliveries. Eventually, after having capped the subscriptions at 55, he put the program on a hiatus [though it’s still advertised on his website], as he can only make so many bagels while using D’Angelo’s kitchen for a limited number of hours.

But Gallagher doesn’t want to just open his own bagel shop at some point. He’s envisioning a daytime bagel shop that becomes a bar at night.

“The part bar aspect comes from wanting to create a third place between work and home while drawing on my past experience from working in bars for the last 14 years. I’ve always loved the bar and beverage industry so this is an attempt to merge the two concepts. There’s the idea that bars have to be a place to go out but we’re trying to toe the line between coffee/bagel shop by day and casual after-work hangout in the evening that is not so much a bar but really just a place to grab a drink…kind of a coffee shop/bar hybrid.”

That is, for the bar, he’s aiming to create the same relaxed atmosphere that you can get at any good coffee shop. 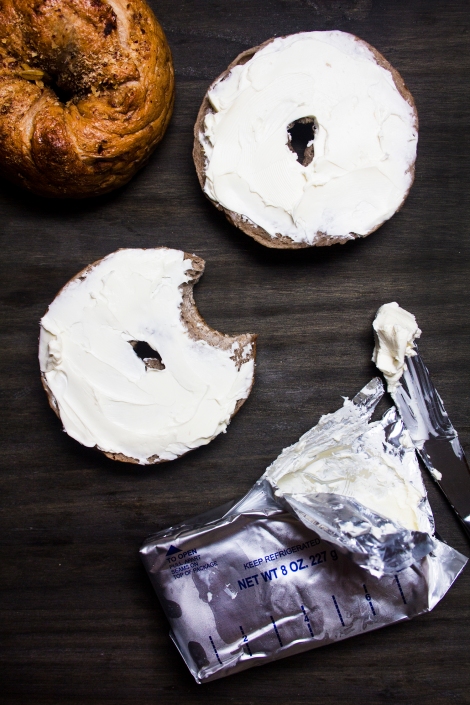 For now, the plan is to continue with office catering while seeking investors for a brick and mortar location in Center City.

“We’re trying to obtain a few investors for a project that’s pretty ambitious–think touch screen ordering, draft cocktails, etc – so that we can hit the ground running as soon as possible.”

“For me, the hardest thing is talking to people about investing in it. Some people have expressed interest, which is awesome. It’s really flattering. But approaching other people about it–it’s a really weird combination of talking about money and myself.”

While he had to be outgoing during his time with Tria, Gallagher would rather let the quality of his bagels speak for themselves. But for a guy who has quietly been making batch after batch of bagels as if it’s something he’s always done, what’s one more hurdle?
More on Philly food & drink start-ups and new restaurants:

An Empanada Carny Roadshow: Meet The People Behind Viva Empanada