This is a new interview series where I talk to farmers at one of the restaurants that they supply. With farms surrounding Philly in all directions, it’s not surprising to pull up to the bar next to a local farmer enjoying a beer after making his rounds.

I also speak with the chefs using the food they supply. Here, I include comments from both Chef Christina De Silva and Taproom co-owner Michael Strauss since De Silva left since I conducted this interview (her last day was June 11th). De Silva’s comments relate to what Taproom has been pursuing through their connection with Lancaster’s Green Meadow Farm since they opened.

Brion Shreffler: How does your day start?

Ian Brendle: So first thing, we make sure the steers get fed. Collect the eggs from the chickens. Feed the chickens, give the chickens water and then pretty much start loading up the trucks. We have three trucks, but we have one main truck that has everything on it. We park that truck in a central location and back the other two up and load everything by order in the order that it comes off. One stop could have 15 or 16 items, another could have 26 or 30. Some might only have 8. So, you just pack it according to each invoice slip. That first truck leaves. The other one backs up. Load that one up. That one leaves. Then Daryl and I get our truck in order, make sure everything is secure. Then we leave. 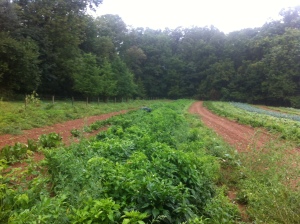 My day [delivering] started in I guess what we’d call Fishtown. Good Spoon Seasonal Foods. It’s on Front St. It’s like a café/store front. They do a little of both, but mostly prepared foods. Then I work my way through the city and finish my day in South Philly. We divide the routes however it makes sense. One truck does The Main Line and outside the city. Another truck does Center City. We handle everything [with a few exceptions] on the east side of Broad from Fishtown/Kensington down to South Philly. Taproom on 19th is as far south as we’ve ever gone.

Busy season, we work 60 hours a week, starting at 6:30am on delivery days [Thursdays] and getting back to the farm between 9 and 10pm. Slow season, we work 40 hours a week. My guys don’t work weekends. One of my guys, he has a 2 year-old. His wife works weekends. If he had to work weekends, he’d be fucked. He can’t afford to pay a sitter or daycare weekend hours. Most farms—dairy farms [for instance] are working way more than that.

I know Good Spoon opened last fall. How many newer clients do you have?

It’s hard—you know how turnover can be in the restaurant industry. There’s a lot of clients that we’ve had for 15 plus years. White Dog Café for instance—pretty much since they opened. From 1983. That’s our longest client, but London Grill, they’ve been open coming on 30 years. We’ve been working with them since they opened their doors. Jack’s Firehouse since they opened their doors. It’s gotta be at least 23-25 years old, something like that. We’ve been working with Vetri and all of Marc’s restaurants since they opened their doors [Vetri opened in ‘98]. Maybe 70 or 75% of our clients are longtime clients, then the other 25-30% are newer clients within the last couple of years. The newest would be Good Spoon, and Little Spoon Café on 15th and South. And this one’s only been open a little over a year, so Taproom on 19th as well. 80-90% of my customers are week to week. We know every week they’re going to order from us. That’s real important to us, to know that.

How did you link up with Taproom?

I didn’t know Pete. I knew Mike before this place because he was staging at the Vetri group.

Close to 30 years for some clients? So, you grew up in restaurants.

I’ve lived a life of food up until this point. I was engrossed in it at a very young age. I remember being three, four years old, running around the kitchen at White Dog Café with Grace Wicks [daughter of Judy Wicks]. Running through the kitchen on a Saturday night while they’re in dinner service. Packed house. 175 people sitting in the restaurant and she and I are running through grabbing strawberries and asking for whipped cream. Stuff like that. It’s been interesting growing up with that sort of perspective on food. I know it has helped me a lot on what I wound up doing, working alongside my father who started the business and really trying to provide chefs with a constant supply of things they are interested in. Pretty much keeping chefs interested in local, sustainable produce. It’s more than just drawing names out of a hat and saying, oh, I’ll grow that. There’s a lot of R&D involved in farming if you want to work with chefs. You have to keep them interested. You have to keep them involved in what you’re doing. It’s not just, ok, you’re gonna grow carrots. Well, what carrots are you gonna grow? Because there are tons of different varieties that you can grow.

And so, I always try to think outside the box and think of things that no one else is doing right now or no one else has thought of yet. It’s a big reason why Tom Culton and I get along so well. It’s because we march along to the beat of our own drum. We don’t look to see what other people are doing and copy off of what they’re doing. There’s only a handful of things that Tom and I might grow the same varieties of and it’s only by chance. There’s so many varieties of things that you can grow. I don’t pay attention to what other people are doing.
CONTINUE READING >